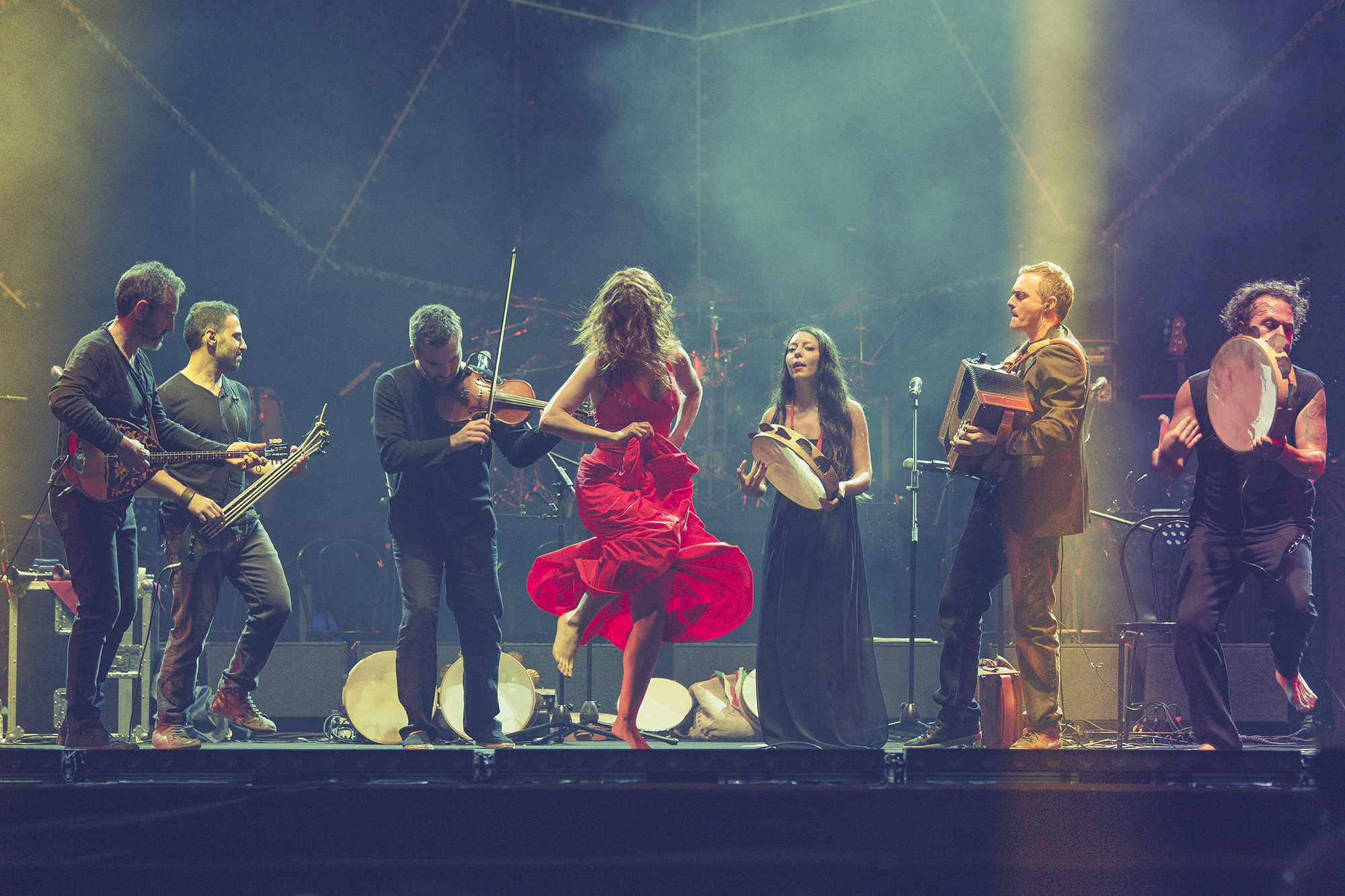 What does an illness stemming from an ancient superstition and its unusual treatment have to say to us today? Four recent albums from Italy try to tell us.

Centuries before the Italy of today, there was the mythology of tarantism, the belief that a bite from a particular spider would plunge its victim into a grave sickness and torpor. The victim’s family would call a sort of musical doctor who would prescribe the playing of intense music, which the victim – usually a woman – would dance to on a white sheet spread on the floor in her family’s home. The ecstatic dance, thetarantella, could last for hours and would eventually expel the venom and its effects.

According to Mauro Durante, leader of the group Canzoniere Grecanico Salentino, the tarantism ritual lasted in the southeastern Italian region of Salento into the 1970s, but may have originated before Christianity.

As the lure of Western modernity consumed Italy as it did so much of the world, the folk traditions of Italy were seen as old-fashioned and stinking of poverty – more worthy of derision than study. Forty years ago, Canzoniere Grecanico Salantino – or CGS – began to revive and celebrate folk styles including the music derived from the taranta ritual.

As the world music movement revived interest in regional traditions, CGS and other neo-traditional performers began to gain a following of new listeners in Italy and then internationally.

While we Americans think we are thoroughly familiar with Italian culture, Italy’s soulful folk music still has not cracked into mainstream consciousness despite the country’s presence in our hearts and stomachs.

Four albums with varying mixes of traditional and non-traditional elements were released recently by the Milan-based Ponderosa Music and Art and are available through the US-based Harmonia Mundi. The albums feel a bit like a set since all draw from the same southern Italian tradition and have several musicians in common. They do, however, add their own shadings to the root style.

Though these neo-trad performers like CGS typically don’t play the actual songs that were thought to cure the spider victims, they draw upon elements of the music. When CGS was founded by Mauro Durante’s father’s cousin, Rina Durante, an iconoclastic female journalist and activist, it was a bit of cultural revolution – a look backwards in a society that was straining toward the future. The band’s leadership passed along to Durante’s father and then to Mauro. In that time, the world has turned a bit toward Rina’s vision, seeing the value of these old-world instruments, songs and rhythms.

CGS’s latest album, “Quaranta,” commemorates the group’s 40 years together even as members have come and gone. Not a greatest hits or compilation, the album comprises new compositions rooted in tradition, but adding new textures. The voices here have a lived-in soulful rasp – not always sweet and pretty, but always intense and arresting. The group plays several sizes of tambourine-like frame drums that give the music a tight, crisp rhythm.

The album – finely crafted in its details despite its rural peasant lineage – also sees the group writing some more poignant tunes like the slow, dramatic “Ninna Nanna,” featuring Valerio Combass on plaintive vocals.

Ludovico Einaudi’s album “The Taranta Project,” is the studio version of a unique concert tour, a mix of genres, instruments and cultures from the northern Italian pianist-composer, who fell in love with the southern Italian tradition.

The minimalist composer keeps an elegant sound true to his classical training, but the album is hardly spare. In fact, at times it can be pretty maximalist. With exuberant African percussion, breathy Middle Eastern flutes and splashes of electronics, it is at times easy to forget this is an Italian album.

Einaudi’s guests Justin Adams of the UK and Gambian Juldeh Camara are members of Robert Plant’s Space Shifters and have their own unique musical partnership, juxtaposing a very modern electric guitar and the very ancient one-string fiddle called the ritti. On a couple of the tunes on which they are featured, they start to make it seem like songs off their own JuJu albums, which is not a bad thing at all.

Einaudi often builds his songs in intensity, spinning together elements from a boundary-spanning palette to stunning effect. As with the traditional tarantella dancing, he brilliantly takes a steady rhythm then makes it more powerful with each measure that comes around, a grand symphony of ancient rhythms, vocals and sounds that the long-ago villagers of southern Italy could never have dreamed of – but probably would have loved.

Multi-instrumentalist and composer Antonio Castrignano does not take as symphonic and ambitious approach as Einaudi on his “Fomenta: Ilenu De Taranta,” but he takes traditional music and subtly weaves new strains into it. With producer Mercan Dede, a Turkish DJ and electronica artist, Castrignano brings out the eastern Mediterranean influence on Salento. The album is fast-paced, befitting the taranta tradition of ecstastic dancing, and creates a tableau that takes Italian folk music back to the future.

The last of the four albums is from the group Kalascima, which titles its latest release”Psychedelic Trance Tarantella.” Despite the title, the music here is not 1960s California psychedelica as much as a who-knows-what’s-next vibe. The group takes the basic elements of the tarantella dance and other folk styles and very consciously makes them new. What anchors it in the tradition is its ecstatic energy and movement – one of folk music’s goals was to animate exhausted workers and Kalascima drives its rhythms hard with a joyous, mischievous spirit.

But what do these exotic and esoteric sounds offer us in the digital age?

CGS’s Mauro Durante observed that the victims of the mythical spider bite were often women in already desperate situations: poor, perhaps in loveless marriages, lost in the dark world around them. “It was one of the only ways to express their suffering,” he said.

Their illness brought shame to the families, as unfortunately happens here among families with a serious mentally ill member or, not too long ago, cancer. He said these ill women were, on some level, reaching out to the healing spirit of community that could come from dancing to the band of amateur musicians who were called in to the victim’s house.

The soulful music from folk traditions embody a simpler time – old-fashioned, yes – but surviving for centuries because it served a purpose for people – our not-too-distant relatives. These old songs and stories “have a power, a magic, that you can feel even today,” Durante said. “And they are connected to really important things. They are connected to contact – something we are losing today.”

“This music, this dance, this tradition,” said Durante, “it is what we are, not only what we were.”

The simple music’s power to grab us viscerally – whether it’s the skin-on-skin pounding of a drum, the raspy call of a voice, the repetition of a melody – remains if we can reach past the veneer of our modern solipsistic sophistication. These four albums from the heel of the boot of Italy are a good place to start to rediscover the vitality of that receding world.