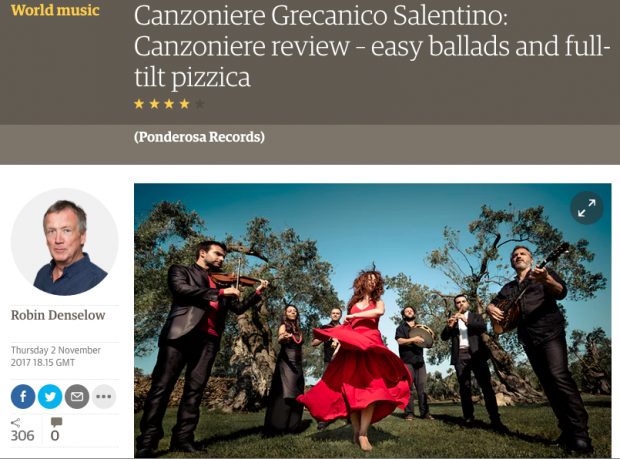 Thursday 2 November 2017 18.15
Canzoniere Grecanico Salentino have built a deserved global following by specialising in pizzica, the hypnotic music of south-east Italy reputed to cure spider bites, with its pounding frame drums, violin, accordion, bagpipes and harmony vocals. They have always mixed traditional and contemporary influences, and here their songwriter Mauro Durante collaborates with European and US writers, including the album’s producer, Joe Mardin, who has worked with Aretha Franklin. It’s a set packed with surprises, most of them welcome. There are slinky, half-spoken vocals on the cool opening track, field recordings matched against throbbing programming, and passages of easygoing balladry. Many of the songs develop into grand choruses, with harmony vocals and full-tilt playing that show CGS at their best, as on Aiora, where they are joined by Justin Adams on guitar. They may be aiming for a wider international audience, but the pizzica still wins through.