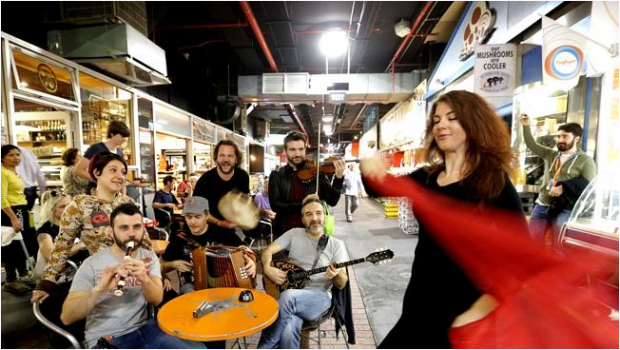 THE frantic rhythms of the taran­ta, or spider, dance was once a ritual exorcism in southern Italy’s churches and piazzas for women bitten by the poisonous tarantula.

Now, rapid tambourine beats accompanied by a scarf-waving dancer, voice, violin, bouzouki and accordion of the seven-piece group Canzoniere Gre­canico Salentino were an antidote for modern-day demons, said ­violinist Mauro Durante, who will perform with the ensemble at Adelaide’s four-day World of Music, Arts and Dance festival, WOMAD­elaide, which began last night in the city’s lush Botanic Park.

Durante said traditions of pizzica-style taranta — which originated in Puglia, Italy’s “heel” — had been revived since the mid­70s, with the band now featuring its second generation of players.

Neo-tarantismo is now celebrated with an annual festival in the province of Lecce, melding traditional and contemporary sounds in the style.

Durante and bazouki player Emanuele Licci’s parents were in the original line-up of the group, which now tours internationally.

“The ritual is dead, tarantismo is dead, but we like to think that the therapy for the suffering is alive — we think that singing and dancing is as much again today a new way to exorcise demons,’’ he said.

Canzionere is among more than 400 performers to appear at the 23rd WOMADelaide, including traditional and contemporary musicians, artists, dancers and thinkers from around the world.

This year’s program, on seven stages, will engage audiences with street theatre, visual artists, a cooking program and environmental discussions.

Festival director Ian Scobie expect­ed near-record, 80,000-strong daily attendances, with Adelaide’s weather forecast to be in the mid-20s over the long weekend.

Founded by musician Peter Gabriel in 1982, WOMAD expanded to Adelaide in 1992 and has become one of the biggest outdoor festivals on the Aust­ralian calendar.