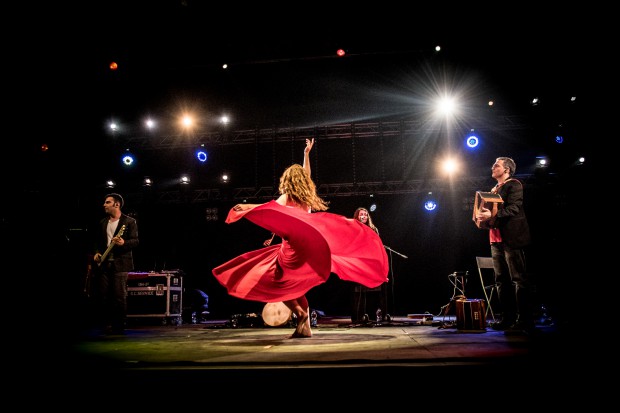 Boasting a name longer than one understands racehorses are permitted, Canzoniere Grecanico Salentino (CGS) hail from the heel of the boot of Italy in Puglia and sing in a mixture of Salentino and modern Italian. Their presence in the city for the first time is precisely what makes Celtic Connections special. As well as a moving contemporary song about the migrants perilously arriving in their country today (its title translated by leader Mauro Durante as One Way Ticket), the sextet, joined for some of the set by a very lovely dancer, play traditional dance music that made the rows of seats installed in the venue an unnecessary impediment.

With three very different and very fine singers in their number as well as virtuosi on pipes, whistles, button accordian, fiddle, bouzouki and tamburello, CGS are like a Mediterranean version of the high energy Quebecois groups we have seen and heard in previous years. Durante’s party-piece of tuned feedback on a solo for tambourine and Shure SM57 microphone was a first in my listening experience however.

If CGS are hot, support act Complete are effortlessly cool. A sharply-suited acapella quartet from South Africa, who have been mentored by Hugh Masekela and Ladysmith Black Mambazo’s Joseph Shababala, they too are in the city for the first time, and it is unlikely the festival will contain anything more multi-cultural than their version of My Yiddishe Mama, or their take on Gaelic waulking song.

And if the showstopping I Love My Beautiful Woman is available as a download, I hereby instigate a campaign for our new favourite boy band to have the Valentine’s Day Number One.