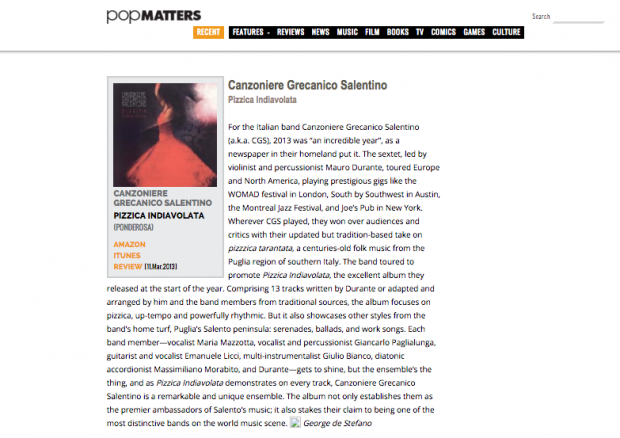 For the Italian band Canzoniere Grecanico Salentino (a.k.a. CGS), 2013 was “an incredible year”, as a newspaper in their homeland put it. The sextet, led by violinist and percussionist Mauro Durante, toured Europe and North America, playing prestigious gigs like the WOMAD festival in London, South by Southwest in Austin, the Montreal Jazz Festival, and Joe’s Pub in New York. Wherever CGS played, they won over audiences and critics with their updated but tradition-based take onpizzzica tarantata, a centuries-old folk music from the Puglia region of southern Italy. The band toured to promote Pizzica Indiavolata, the excellent album they released at the start of the year. Comprising 13 tracks written by Durante or adapted and arranged by him and the band members from traditional sources, the album focuses on pizzica, up-tempo and powerfully rhythmic. But it also showcases other styles from the band’s home turf, Puglia’s Salento peninsula: serenades, ballads, and work songs. Each band member—vocalist Maria Mazzotta, vocalist and percussionist Giancarlo Paglialunga, guitarist and vocalist Emanuele Licci, multi-instrumentalist Giulio Bianco, diatonic accordionist Massimiliano Morabito, and Durante—gets to shine, but the ensemble’s the thing, and as Pizzica Indiavolata demonstrates on every track, Canzoniere Grecanico Salentino is a remarkable and unique ensemble. The album not only establishes them as the premier ambassadors of Salento’s music; it also stakes their claim to being one of the most distinctive bands on the world music scene. George de Stefano