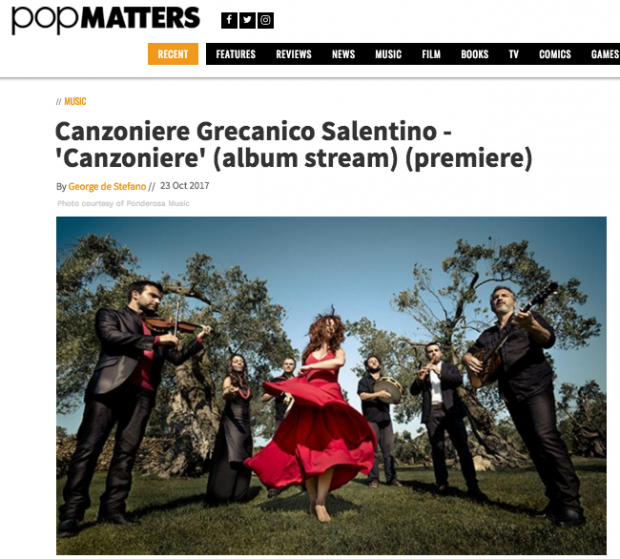 Canzoniere, the new album by Canzoniere Grecanico Salentino (CGS), adroitly pulls off a tricky balancing act: adapting the Italian band’s unique, folk-based style to Western pop. The album’s cover art, a photograph of a Coca-Cola bottle filled with tomato sauce, is a visual metaphor for CGS’ new music. As CGS leader Mauro Durante notes, the Coke bottle “is a container — the Western pop song — but we put our own homemade sauce into that container.”

The album, whose title is Italian for “songbook”, comprises 11 original compositions and one traditional song, recorded in New York and Lecce, the band’s home base in the southern Puglia region. (Lecce is considered the capital of the Salento, a sub-region of Puglia famous for its music, dance, and Greek-derived language.) Canzoniereremains faithful to pizzica, the rhythm-powered Salento idiom that has made CGS an internationally acclaimed recording and touring ensemble. “We are still using our typical instruments, tamburelli [frame drums], violins, bouzouki, organetto [button accordion], and bagpipes,” says Durante. “We sing in Salentino dialect, we use our particular vocal, musical, and harmonic style, and our music is still driven by rhythm.”

But Canzoniere unmistakably is a departure from previous CGS albums and a new chapter in the band’s history. Here, pizzica merges with club-ready dance numbers, soulful ballads, and anthemic pop.

Before their collaboration with Durante, none of these songwriters was familiar with the music of CGS. But he says that once they heard it, “everyone loved it and wanted to try something with me.” “Meeting those people, and writing with them, has been one of the most challenging and exciting experiences of my life,” he says.

The songwriting process sometimes began with Durante’s ideas (the tracks “Ientu” and “Intra la Danza”); at other times it started from scratch (“La Ballata degli Specchi”). The spark could be a rhythm (“Con Le Mie Mani”, “Moi”), a spoken-word loop (“Quannu te Visciu”), or an ethnographic field recording (“Lu Giustacofane”). Durante wrote “Subbra Sutta” with Mardin and the Anglo-French singer and songwriter Piers Faccini, who collaborated with CGS on Pizzica Indiavolata. Mardin joined Durante and CGS in Lecce, where they created the tracks “Tienime”, “Sempre Cu Mie”, “Pizzica De Sira”, (the album’s only traditional song) and “Aiora”, the last a new song written in traditional style by Durante and Alessia Tondo, who joined CGS after the 2015 departure of longtime member Maria Mazzotta. Canzoniere is Tondo’s recording debut with CGS, and as her contributions demonstrate, she is an excellent replacement, a distinctive vocalist and songwriter.

In Salento, pizzica originally was played not to entertain audiences but in rituals to heal the psychic and emotional wounds of workers and peasants, mainly women, who believed their suffering was caused by poisonous spider bites. Although it no longer has that function, pizzica retains ecstatic and cathartic qualities. Healing personal and social distress, whether through love, activism, or dance, has been a recurring theme of CGS’ lyrics. Canzoniere is no different. “Intra la Danza” (Into the Dance) is an exhortation to “together heal this illness”; “Lu Giustacofane” (The Mender) says “there is no wound that can’t be healed.” In “Quannu te Visciu” (When I See You), the narrator, whose “head is exploding” from the empty chatter of omnipresent know-it-alls, finds respite in his lover’s eyes.

Some CGS fans might be surprised by the big, anthemic choruses on tracks like “Moi” and “Lu Giustacofane.” But as Durante points out, in writing those numbers he was inspired by the great tradition of Italian, and especially Neapolitan song, with its indelible melodies and choruses. “Wanna speak of anthemic choruses?” he says. “I’d say ‘Nel Blu Dipinto di Blu.’ Who doesn’t want to sing along with that chorus, “Volare, oh oh”?” Durante also acknowledges the influence of folk-pop acts like Mumford and Sons and the Lumineers.

Canzoniere Grecanico Salentino always has balanced the musical traditions of the Salento with their own contemporary sensibility. On Canzoniere, CGS has created a captivating synthesis of homegrown and international sounds, a fusion of styles and influences that never loses sight of its roots. It should delight longtime fans and attract the broader audience this remarkable band deserves.